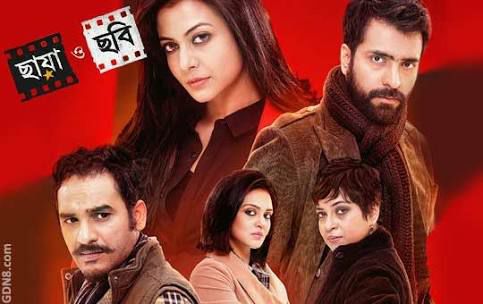 Overall Chhaya O Chhobi is an okayish one time watch… But it just does not have the texture and feel of a Kaushik Ganguly film, and that is a Big disappointment in itself! Especially when he had hit the bull’s eye with his last outing in Bisorjon..

A film within a film, and that too in the serene lap of Darjeeling – the possibilities could have been endless here, but Kaushik barely scratches the surface, and does not get into the depths of the different shades of grey that he tries to build up on.. And that is clearly an opportunity lost!

The film is strengthened by a terrific Ritwick Chakraborty (who by his sheer talent just relegates every other character to the background!), the beautifully nostalgic Darjeeling and Dooars (though its kind of tragic that you go to such locations and set up most of the scenes indoors or within the hotel confines!), some great musical score (some of the songs like Ekla ekla & Chhera drawing khata will really stay with you!), and a more than decent Abir Chatterjee (who also benefits because he hardly has scenes with Ritwick and hence does not get chewed up completely!)

But the film equally suffers heavily by the rather inconsistent Koel Mallik which is a big issue since her Rai Chatterjee needed the strongest enact on screen for the film to find its grip, a pretty weak supporting cast including Churni Ganguly, Barun Chanda and Priyanka Sarkar all of whom overact so much more than needed, a somewhat loose and poorly edited screenplay which is usually the highest point of Kaushik’s movies, and an even weaker ending which could have been so much more, but just isn’t satisfying enough!

There is so much to explore in the world of cinema and in the people who live that life, their stardom, their human emotions, their insecurities and everything around it.. Unfortunately, while Kaushik lays the foundation and peeks into that ‘life that is so much more melodramatic than cinema’, he just does not develop that with the same finesse and clarity of thought which we have seen so often from him in some of his other ventures!

We have enough directors who can make a Chhaya O Chhobi or a Bastushap, but we need to get back the Kaushik Ganguly who and only who can make a Khaad, a Bisorjon, a Shabdo, an Arekti Premer Galpo or an Apur Panchali! We will be waiting… !!