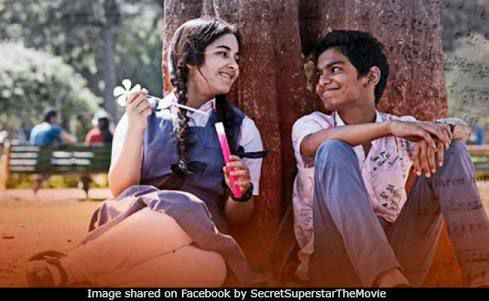 There is indeed a secret star in this year’s diwali release – Secret Superstar by Aamir Khan and Advait Chandan! No, I am not talking about Zaira Wasim or Meher Vij, but about this lovely boy called Tirth Sharma who gives a brilliantly natural and the most subtle performance in the film! Its a pleasure watching his expressions and honest portrayal of a lovely friend, and the scenes between him and Zaira are some of the best I liked in the overall film!

At his extreme other end is the real superstar, Mr. Aamir Khan, who just delivers a knockout act with the sleazy over the top Shakti Kumarr, who is as cheesy as it can get, but he just lets it all down and makes you literally laugh out loud, every time he is on the screen! Drawing inspirations from Himesh in real life and Taal’s Anil Kapoor in reel life, Aamir just blows you away like a rockstar, salute to his versatility in pulling off this after the much nuanced Dangal! I actually stopped over to watch his funny last song, along with the rest of the theatre, and left with a broad smile!

And now lets talk about the Maliks! At the end of it, the story actually revolves around them – this girl called Insia, and the 2 very important characters in her life who have a diametrically opposite influence on her – a mother who is her life, and a father she wishes was dead (and vice versa)! As the parents, I felt that Raj Arjun hits the nail with his Farookh! He lets you hate him without resorting to any over the top exaggerated or loud performance, but is chilling and venomous enough with his speaking eyes, cold gestures and well nuanced act! It is sad then that the mother and the daughter characters are written in a way that is overtly emotional and infact even somewhat manipulative in the drama to make it a forced tear jerker! I did like Meher Vij in most parts, she looks very honest, tries to deliver honestly as well, but the script does not help her! And it does not help Zaira Wasim too! Frankly, Zaira looks and acts way too much more maturely than what this character demanded in my opinion, and in the process compromises on the spontaneity of the fifteen year old daughter completely! I could not help but compare with the extremely natural and endearing bond played out by Swara Bhaskar and Ria Shukla as mother daughter in Nil Battey Sannata which felt so much more genuine and heartfelt in that setup! In spite of all the drama and forced emotions here, somewhere this pain does not touch you and that is where I felt the connect missing big time in this film!

Rather than this bond, I found the film doing much more justice in depicting the anxiety, reactions, and everything else that is a teenage thing! Insia the teenager and her growing up vulnerabilities, her excitement after her first laptop, or first social media upload, her selfish dreams, her exchanges with Chintan (Tirth) and the extremely lovable Guddu (Kabir Sajid) will stay back with me much longer than the otherwise predictable drama!

What will also not stay back is unfortunately the music that should have been the backbone of the film! Meghna Mishra is a great find, but a big problem with the songs is the somewhat weak lyrics, and the accompanying loud music overpowering Meghna’s powerful voice in almost all songs! Sad!

In summary, no surprises there in the film from what the trailer suggested. It is a predictable emotional drama with some good performances, and is well timed for the family audience of Diwali! Aamir Khan the producer has certainly mastered the act of how to deliver entertainment for the masses banking on emotions! How I wish Advait Chandan’s writing and direction had the power to support him as strongly as well! I felt letdown on the whole!