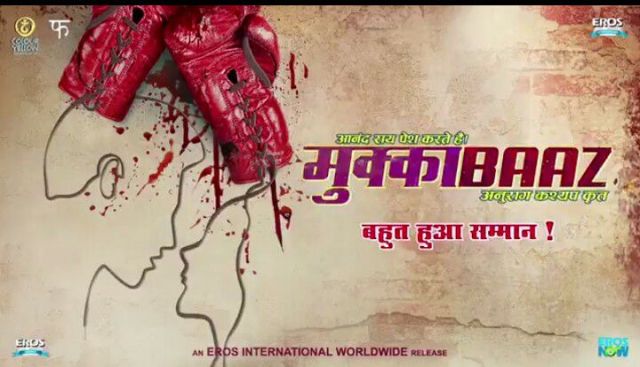 The viewer understands this fair and square in Anurag Kashyap’s Mukkabaaz, where neither love is as easy as a game.. nor the game and the fight associated with it has the purity of love..

These are the dark dungeons of Bareilly, where the difficult fight of survival is not so much inside the boxing ring, but far more outside.. Its a fight against the rampant corruption in the sport where the Mukkebaaz loses his bout against the Mukkabaaz..

And the man who comes out winner in that fight is a man called Vineet Kumar Singh! To me, he is the life and soul of the film and nails down every breath of Shravan Kumar to perfection. In fact, Mukkabaaz can easily be termed as much more of his film rather than Kashyap’s, because there are places in the film where clearly Kashyap is not in his comfort zone, especially when the film solely focuses on romance. There is no doubt that no one weaves the texture and flavor of small town rustic India like Anurag Kashyap, he absolutely knows his craft well when it comes to dark and disturbing, but somewhere he does fall short of weaving the love story equally seamlessly into the overall fabric of the film.. No wonder, the first half of the film drifts aimlessly in places, but Kashyap does well to bring things back to track quickly.. He doesn’t do too well though to keep the overall script too tight or consistent. Its his greed to say too many things at the same time, and his focus on every detail for character building, that hurts the length of the story.. and hence does not completely engage the viewer into the script that he had done so beautifully in Gangs of Wasseypur as an example.. And so Mukkabaaz also stays short of becoming a typical Anurag Kashyap classic!!

What works brilliantly though is the absolute power punch of a performance from Vineet Kumar Singh, who becomes one and the same as Shravan Kumar.. Equally brilliant as him is Ravi Kisan as the underdog dalit coach, who unfortunately gets a much smaller role than what he deserved, but yet makes it one of the most memorable characters in the film.. I wanted to see him a lot more in that overlong screen time.. Zoya Hussain makes a spunky debut but overdoes herself in many places to portray a fierce Sunaina.. In small roles, Shravan’s father and Sunaina’s mother leave a mark.. The weakest character arc of the film is the single note Bhagwan Das, and Jimmy Shergill also doesn’t elevate it much from how it is written, and disappoints overall…

The soundtrack of the film is actually pretty good to listen to, though it suffers because of its overuse in many places.. But ‘Bahot dukha man‘ is a fine find for me which will be on my playlist for long.. The cinematography as expected in a Kashyap film is top notch, and the boxing bouts especially was wonderfully choreographed.. The production design scores with all the details, as does the background score in a few places (where songs are not used.)..

And yet, when the most impactful parts of the film is the power packed long opening shot in the beginning, and the absolutely realistic end followed by a terrific closing titles frame, you know the film has lost you in the middle..

Anurag Kashyap knocks the ball out of the park with the end message of what happens as life goes on.. and Bharat Mata ki Jai never felt more relevant on the cine screen before this! Kudos for that brilliant end.. Wish the same could be true evenly and as powerfully for the entire film!