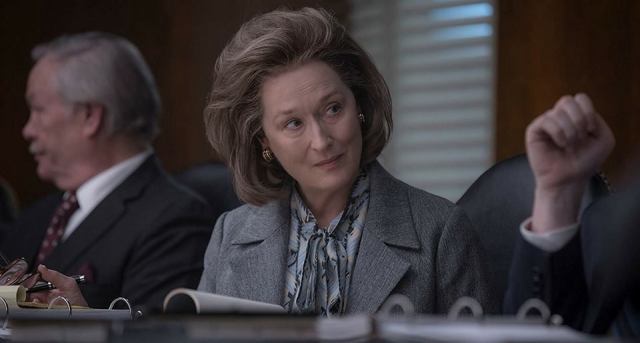 In one of the brilliant scenes of the film, Tony Bradlee, wife of Ben Bradlee (the chief editor of The Washington Post) tells her husband why she thinks Katherine Graham (Publisher and The boss at the very same paper) is the bravest of all, taking that bold decision from where she stands! It is this bravery and fearlessness that is the winner all the way in The Post!

Its the bravery of Kay Graham who is fighting her own battles not just to find her own feet in a world she suddenly finds herself in, but also of her paper to survive first and then rise above and beyond just being another local newspaper. Its a world full of know-it-all condescending men who don’t believe she has it in her to hold that post of power and are constantly advising, questioning and pushing her in board rooms, telephone conversations or socialite evenings; and she is standing there alone fighting them bravely, hiding her vulnerabilities, and challenging every status quo of what the world expects of her!! And Meryl Streep delivers a terrific Kay Graham like no one else could have! Its a master-class of performance from her, flawlessly emoting on all the complex layers of Kay, with a lot of goose-bump moments right from where she takes the historic decision of Go to where she fumbles at the boardroom even after all the prep or her all-hearts conversation with her daughter! Streep clearly steals the show on this one!

The Post is also about the bravery of Ben Bradlee who believes that truth needs to told at all cost, and that freedom of journalism should not bow down to the extrinsic pressures of any kind! He is one hyper energetic, rough but demanding straight shooter, who doesn’t get bogged down by insane deadlines or repercussions of what may be in store when the big story is out! And at the same time, he knows his ways to debate it out with his boss and get her buy-in to proceed at every step. Ben’s attitude is also representative of the team of reporters who work for The Post and they all find their voice through him! And kudos to Tom Hanks for yet again knocking the ball out of the part with a top notch sure-footed act of Bradlee and his convictions! He gets everything about the character spot on, and delivers yet another winner!

Finally – The Post is one of the bravest films of our times, thanks to Mr. Steven Spielberg and his marvelous execution of a story revolving incidents from many decades ago, but still wonderfully relevant! Relevant because today the independence of the media and its objectivity is under extreme threat like never before; relevant because governments across nations still continue to indulge in activities they should not without caring what part of the nation they are responsible for is put on stake due to that; relevant because even after so many years women are still struggling to be taken seriously as the head of boardrooms and are still exposed to implicit and explicit condescension, often without others even realizing the same.. We need Spielberg to continue telling such relevant stories and making such brilliant cinema evoking such gripping drama.. And may be next time, he should not neglect the backstory of the actual whistle blower too, Daniel Ellsberg in this case, which is possibly the only weak link of The Post..

Make sure you don’t miss this brilliant brilliant film! It may be invigorating back the fearlessness in you!