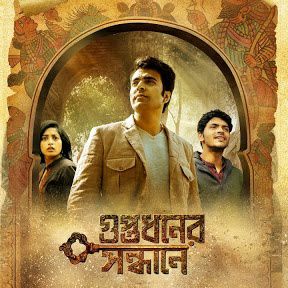 You always don’t need to watch a technically brilliant or a flawless film to enjoy it! Sometimes you enjoy films just because of your fascination for riddle based thrillers, and because something like that is at least being attempted in bengali cinema beyond the greatness of ‘muro haye buro gachh‘ and its creator!

Yes there are issues with execution, yes the background score is unnecessarily loud and the script flow didn’t need a song at all, yes Rajatava Dutta is too caricaturish and Arjun Chakrabarty as Sona’das nephew Abir isn’t able to sustain himself how well he started; but then you didn’t go in expecting that everything will fit in perfectly hand in glove in the film!

What works pretty well though is the overall orchestration of the riddle based treasure hunt, on point Gautam Ghose (wish he had much more screen time), some pretty good cinematography (especially some of the top shots and the climax shots at the treasure site), a decent Isha Saha for the most part, some occasionally good situational humor (which also falters by the way in some places), and yet another charming and smart performance by Abir Chatterjee as the instant born investigator Sona’da in search of the ‘Guptodhan‘ – thereby keeping us entertained on the whole, far more than some of the mindless Kakababu thrillers or Shankar’s adventures of recent times!

Writer-director Dhrubo Banerjee can certainly think about making Sona’da as a full fledged lead for a franchise, especially post the success of Guptodhoner Sondhane! Subarna Sen has all the charisma to become the next sharp bong slueth who can rule the hearts and minds of the bengali cinegoer through his fascinating charm and razor-sharp mind. And hopefully by that time, the other rough edges of Banerjee’s filmmaking will also get refined to give us a better finished and less flawed thriller, something much more than a pacy entertainer that it currently is – which by itself is not bad or too much to complain about!