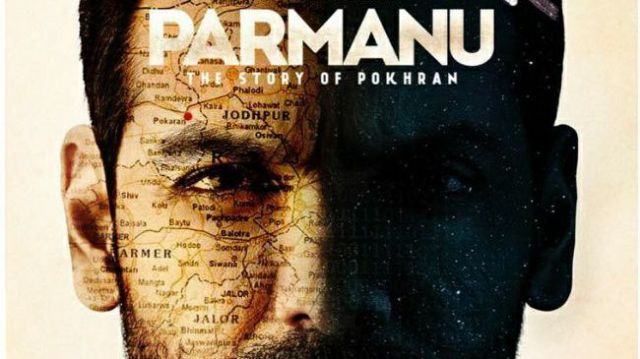 If a film is running houseful on a weekday evening of its second week, then it must have got a few things right! Parmanu is definitely one such film. No one can claim that it is all perfect, or the best film they could have made on the subject. But choosing the subject of the Pokhran nuclear tests and attempting to carve out a decent drama from that is half the battle won. Its a risky topic to barge in – too technical in its core, there was risk at every point for director Abhishek  Sharma that it won’t have enough grip on the audience, and hence one had to make do with creating a dramatized version of the narrative. Luckily though, it never goes overbearing or chest thumping and pretty much remains on point.

Parmanu stays with a one note linear narrative unlike the recently successful and layered Raazi, but it works for this subject. In fact, the film works lot more when it keeps it focus on its uni-dimentionality, and wobbles when it tries to go back to a poorly written personal story of John, or tries to weave in a Rajasthani local flavor to the script that appears forced. The best sequences of the film are the action sequences choreographed well with the ticking clock even though its well known that all will be well in the end. It is a simplistic depiction of the mammoth covert operation from two decades ago, but that does not rob it from its tensed charm and what-happens-next thrill which is commendable. One does note the gaps in the screenplay throughout though, the most glaring one being how the film starts and in the first twenty minutes, it has almost lost you. It almost appears to be ghost directed by someone else, but thankfully recovers well from that point. The other soar point is the whole depiction of the CIA operations center, the amateurish satellite visuals, and the caricaturish Americans. On the other hand, what works very well in the script is the use of actual footage of Indian, American and Pakistani leaders across decision points, and lends some sort of authenticity to the proceedings, which clearly did not work in Omerta a few weeks back due to its poor blending in that script.

Most of the performances are decent if not outstanding. Boman Irani was definitely the most convincing, and I wished to see him a little more, may be at the cost of some scenes of Diana Penty who was clearly out of place. The other four of the Pandavas are infact pretty well cast and should have been given broader character arcs to lend some depth, it was a wise decision not to cast very famous actors in those roles for them to stay away from any star flair. But ultimately the film belongs to John Abraham – John the producer possibly needs to be applauded lot more than John the actor for backing such a subject, but even the actor has come a long way and he is clearly working hard to deliver some meaningful roles well outside of his limited comfort zone. And that was certainly a plus towards making Ashwat Raina believable for a good part here, even though he does fall short in delivering some crucial scenes involving some of the high intensity monologues, and hence somewhere the soul of the film goes missing.

Parmanu – The Story of Pokhran may not feature in Best of 2018 lists when they will be drawn out towards the end of the year, and that is fair. Where it scores big is when a theater full of audience across age groups gives it a thundering applause for its undiluted delivery of patriotism, especially when the end credits flash the images of the real life heroes who led this terrific mission led by the ever respectable Dr. APJ Abdul Kalam! #Respect