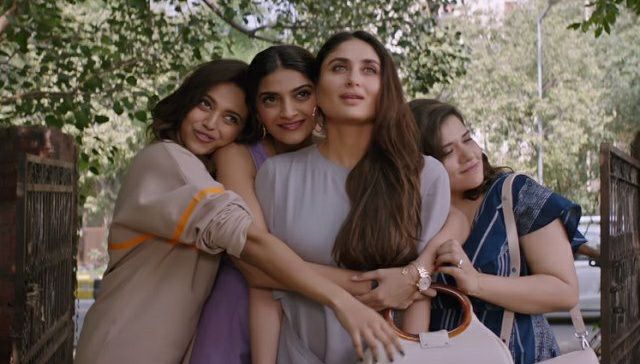 Veere Di Wedding, the most talked about film of the season for reasons it certainly does not deserve, could have been the most talked about film of the season for all right reasons! 105 years as per the film’s cast, and 18 years since the iconic buddy film Dil Chahta Hain, here was a golden opportunity for a gang of four happening girls to create that landmark female buddy film to be remembered for years. They had the perfect posh Delhi setting, the right grooming and education as childhood buddies, the perfect carefree kickass attitude, each very different from the other, and each dealing with specific problems regarding relationships and marriages at different points in their life. Something like this should be very relatable for a lot of women (and men), and hence the premise should be perfect to squeeze out a thoroughly entertaining drama out of it.

Unfortunately, none of that happens and the film suffers badly in the hand of rather poor writing to make it a very average and somewhat boring film. And writing is not at all a problem for it being accused of generously using language loaded with expletives both in English and Hindi, No! Infact none of that lingo appears put on or out of place, and feels pretty normal in the way the girls use it in their context. The writing is a problem because it fails to develop any warmth or camaraderie between the girls, and their entire friendship thing looks very superficial and plastic! Hence none of their jokes appear funny, their problems do not impact you, their conflicts are wafer thin, their supposedly warm bond pops out cold, and appears as gimmicky as the innumerable eye soaring product placements across the film!

After having read so much about the film in past one week, I had gone there expecting to have harmless unadulterated fun and laugh out loud at everything – whether it would be the spoof pulled on the posh Delhi culture and its cardboard side characters from a mad wedding, the funny banter between a mother and daughter desperate for marriage, the cute little tension between a couple unsure about a heavyweight marriage, the fuck-off societal rebuttal of a kick-ass girl from a failed marriage, or the weight problems plus early kid craziness from a rushed marriage. All the ingredients were there to be cooked into a spicy, delicious meal, but alas no one bothered to cook it! There was hardly a joke that was funny, a moment that was all-out entertaining, an emotion that was real, a conflict that stood on its weight, and a resolution that felt genuine! It was all on the surface and incoherent. No the film didn’t need to be laden with heavy messages or be a flag bearer of any pseudo feminism to make any of these points, and luckily it does not fall into that trap. However, it needed to be a breezy light comedy garnished with a lot of heartfelt buddy moments, moments you would feel and connect to, and that is where it exactly fails! What a terribly missed opportunity!

The best moments of the film are actually when it loses the baggage to say a lot, drops everything and plunges into the pools of Phuket just to have fun! That’s the only time the chemistry of the girls really shows up, they have some warm moments together, opening up on their issues and gaining strength from their friendship to actually go back and fix a few things! Wish it had more and more of that, that would have added so much more soul to the otherwise charming world created by some nice and glossy production design, glamorous costume design, and happy cinematography! The music gels in too and the title track does bring in some happy vibes with it – nice!

The performances unfortunately do take a beating primarily again because of the poor screenplay and rushed treatment. Kareena Kapoor‘s Kalindi is the most poorly written character of the film, and it could only thank Kareena’s talent to rescue it from becoming completely listless and still make it one of the most relatable out there in that crowd. Kareena looked a million bucks too, and Kalindi Puri is easily one of the best looking brides in a long long time!

While so much is being said about Swara Bhaskar, it is she who disappointed the most – her Sakshi appeared too forced and frivolous. She went way over the top to project a character completely out of her comfort zone and leaves zero impact.

Meera could have been so much more had Shikha Talsaniya gotten more screen time with her, because she was nice and easy with her character, just like she always is. But what was it with having her puke scene right after the interval when you have just settled in with your tub of popcorn?

It was Sonam Kapoor and her Avni who surprised me the most though. She was easily the one who stood out amongst all the veeres for her role and possibly gave the most effortless and easygoing performance of her career. Barring a few scenes where she could not stop being Sonam or had poorly written scenes again, she was major fun and delivered pretty much on point.

But you know that the film has missed its bus when it is three men who score over the four central female characters and come out stronger even with underdeveloped roles, whether it was the very endearing Vivek Mushran, the absolutely adorable Sumeet Vyas, or the madcap Vishwas ‘Bhandari‘ Kini. You also know that the script writer has screwed up big time when ‘have some balls’ becomes a commonly used aspirational phrase, or when an engagement event goes wrong not so much because of what happens between the couple, but because of the randomly happening messed up side events that fail to generate any sense of chaos or confusion, followed by a random ten second buddy fight instantly resolved by a random Phuket trip! You can’t help but blame it all on writers Nidhi Mehra and Mehul Suri who just let the film slip with their lazy directionless writing, and director Shanshanka Ghosh lets that happen without making any amends at all! Sigh!

So we will continue to wait for the day when a Zoya Akhtar will seriously think of lending a far more solid platform for such Veeres to fly high, to breathe, and to have the most enjoyable ride of their life with or without a wedding, and just have plain unadulterated feel good fun! Because we and our veeres deserve it as much and more!