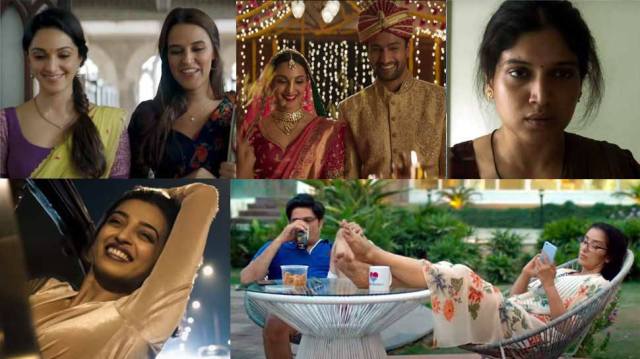 Five years ago, four of the most well known filmmakers of hindi cinema came together to create their first anthology film Bombay Talkies with a common theme of cinema running across all the four stories. It was a sumptuous treat with each of the four stories created a world as different as possible from each other, but each on point. With such a delightful precedence, the expectations are set to sky high to reach the same cinematic orgasm especially when the next anthology film in the series deals with the complicated and the prohibited theme of Lust across four new stories.

Lust that has either been hushed up as a bad word of immorality, or one that gets a diluted exposure as C type jokes in our misogynistic cinema, but Lust that is very real and needs to be addressed as distinctly and boldly as our four storytellers do in their Lust Stories! Kudos to them since each of them use the opportunity to structure their tales around the forbidden territory of female sexuality, to talk about passion and desires that wants to lend itself the strength and the courage to exist and breathe within or beyond the shackles of wedlock, doesn’t matter if you are a house maid or a trophy wife of super-rich business tycoon. This desire is much more far fetched than lust, it is notional and wraps around it the tales of search for one’s own identity, individuality and sense of aspirational freedom across a wide range of women across social, cultural, economic and age strata.

The films this time are fitted in the exact reverse order of last, thereby increasing the inquisitiveness whether this would also lead to a very different order of my liking the films. The well done initial title card also hints at a quirky and sensitive story telling with opportunity to peel layers of emotions across the board. Did it indeed happen? Let us find out.

The first feature of the package is from Anurag Kashyap and possibly attempts to tell the quirkiest story, at least through a very bold protagonist Radhika Apte who wants to turn the tables and explore her impulsive desires in an open marriage with her sense of possessiveness desperately imitating masculine control and almost bordering on eccentricity. It is an interesting premise, and Apte’s fiery performance gets contrasted well against the vulnerable and nuanced Akash Thosar, but the film disappoints overall because Kashyap tries too hard to drive home a point and makes it overlong to the point where the quirkiness eventually converts to irritation and the story has lost your attention. Kashyap’s style adoption of his protagonist breaking the fourth wall and speaking to the camera to explain what is going on in her mind comes out as jarring and robs the story of all avenues of interpretation. A bumpy start then, and you wonder if rest of the film will be able to hold up any good ground.

But all the skepticism is thrown out of the window, because the next short by Zoya Akhtar is easily the most layered and powerful film of the quartet! This one explores how it is absolutely okay to use the maid of the house and get her to oblige and perform all the wifely duties for a man right from warming him up in the bed to ‘tauliya lao‘ till the time when the actual spouse arrives, thereby also giving an indication of what the household routine of that new individual can potentially become post marriage. In her career best performance, Bhumi Pednekar is a delight to watch as she speaks a thousand words through her silent gestures and passive eyes while being the compromised woman whose existence is hardly acknowledged unless in bed as felt convenient by the one note Neil Bhoopalam, but also being the one with her momentary triumph because she knows that she is at least handing down her master’s lust as broken seconds to the new bride, something that usually she or ones like her receive. The imagery that the film uses is strongest right from the superficial spic and span outer living rooms, to crushed sheets and emotions of bedrooms, to the monotonous arrival or departures of the irrelevant and paid help amidst life that goes on, right upto showing her the way several floors below to the ground where she and her desires actually belong! Superlative stuff this one!

The momentum continue happily to the next by Dibakar Banerjee which is possibly the ‘best performance by an ensemble’ film of the anthology because it gets its casting pitch perfect. It is a poignant tale of extra-marital complexities between a super-rich man, his middle aged wife and mother of two kids, and his best friend, the later being far more interested in maintaining peace and stature with his friend, rather than respecting the wishes of a woman he has been seeing and bedding for three years now without any guilt. It doesn’t matter what the woman wants even if she is just a trophy for a husband who has no time to understand her or respect her existence, and is also a possible perquisite that her lover enjoys from the friendship with her spouse, but doesn’t have the guts to see a future together defying social norms. Social norms so weird and superficial at that strata of the society that even the husband doesn’t want to rock the boat and maintains status quo as if nothing ever happened, and the woman plays along to peace even after she had the courage to expose her own infidelity and get the understated upper hand off both the men. Manisha Koirala, Jaideep Alhawat and Sanjay Kapoor are all in top form and capture the hollow emotions of these central characters with adept maturity. Alhawat is especially very good and totally on point as the spineless friend, and Kapoor seems heavily inspired by what his elder brother did in the cruise ship tale of Zoya from few years ago and proves that it is a brilliant casting decision!

As is the casting on point in the final short of the feature by Karan Johar, especially for Vicky Kaushal who has not disappointed to date! In a film that is possibly loaded with the most commercial cinematic elements of the four and naturally so, Johar exposes how sexual desires are expected to derive pleasures only for the groom while it should be the road to attain motherhood bliss for the bride. Its a story well told, and Kiara Advani does well to capture the range of emotions that the young bride goes through right from her counting the repetitive lust routine, to her seeking out for self help when her husband, a terrific Kaushal doesn’t even understand what she actually desires for. Although its a premise seen before, especially in the quirkiest part of the story that is easily identifiable from other stories of the west, it always feels good to see that films like this give Johar the courage to challenge his set templates, even make fun of them and make his best cinema. How I wish he hadn’t closed the film the way he did and had showed slightly more courage to cut it out a shot or two earlier on a more liberating and satisfying note.

In summary then, Lust Stories becomes a thoroughly enjoyable experience and a bold commentary to explore untold but important stories of desires, longing and identity, far deeper than lust, and more compassionate than passion. Its also wonderful to see the four prolific directors continuing to work together on such interesting subjects and create content so distinctly flavorful and different from what rules the box office! Cheers to them and to good cinema!

And by the way, irrespective of the order in which the stories were presented for either cinema or lust in the two anthology films, my order of liking for the four stories surprisingly remained the same for both the films:

Some coincidental consistency there!!