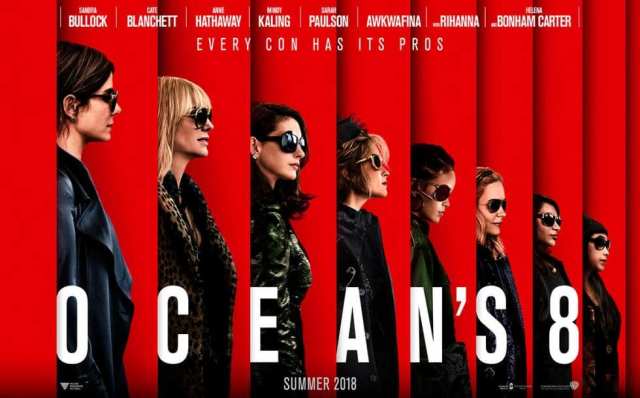 When you look at the A list cast that the film could pull together, and you look at all the fun that the three part Ocean’s Trilogy as its predecessor was, you can’t help but feel sad about Ocean’s 8 being a real missed opportunity!

In the typical Ocean’s world, all you are looking for is a lot of frothy popcorn entertainment, where unbelievably complex heists are pulled through with some top notch prep, well coordinated execution, slick technology, some unplanned disruptions and some very smart work arounds. This is usually a world devoid of much logic, but loaded with lots of style, smartness and charisma of a bunch of suave hustlers who pull you in into their make believe world spiced up with oodles of charm, fast paced action and no nonsense humor. Ace hustlers George Clooney and Brad Pitt had mastered this act in their films of this franchise and were ably supported by their partners in crime!

The expectations from Ocean’s 8 was on similar lines, and the whole thought of a bunch of kick-ass women now taking the legacy forward was even more interesting because one expects all the aspects of the franchise to be retained and further enhanced now with lots of glamour and oomph to go with it. Sadly, the end product that Ocean’s 8 becomes is at best warm and mostly tepid against the expectations. A major problem here is that this bunch of women really don’t seem to be having much chemistry between them and the whole unit comes across as rather cold. Also some of the girls including Rihanna, Mindy Kaling, Awkwafina and even Sarah Paulson are severely underutilized. Especially, not giving enough meat to Sarah Paulson to play with is almost a crime for any film. Helena Bonham Carter has a better role written but her performance didn’t work much for me. So its primarily left to Sandra Bullock and Cate Blanchett to do all the heavy lifting, which would have been fine had the chemistry between Bullock and Blanchett been as charming as that of Clooney and Pitt. We know what Cate Blanchett can do, but that was not to be in this film especially how her part was written. Bullock on the other hand is better in a meatier role, but still has more ground to cover to be the serious successor of Clooney’s Danny Ocean. The best of the eight for me here was Anne Hathaway! She pulls off a super-cool parody on the mannerisms & theatrics of a Hollywood star, and each time she is on screen with her million watt smile, the entire segment lights up! We needed more of such lit up moments on screen for the entire film.

The bigger problem though is the screenplay. The entire heist plot is all too convenient, and even if its make believe, the logic envelope is pushed a little too much here to really buy into the proceedings of the screen. The conflicts are resolved even before they happen and hence the supposedly uber cool and sexy feet comes out as pretty bland. The entire revenge subplot with Richard Armitage as an ex also does not fit in and is more distracting than enriching in an already wavy script. Most importantly, all the experience and craft of Steven Soderbergh as the Ocean’s Franchise director is badly missed, who has only produced this film, and somehow Gary Ross in the hot seat does not show as much spunk in this brand of slick entertainment.

I wish it had all come together much better, and this con act indeed had more pros than what it eventually has. Sigh!