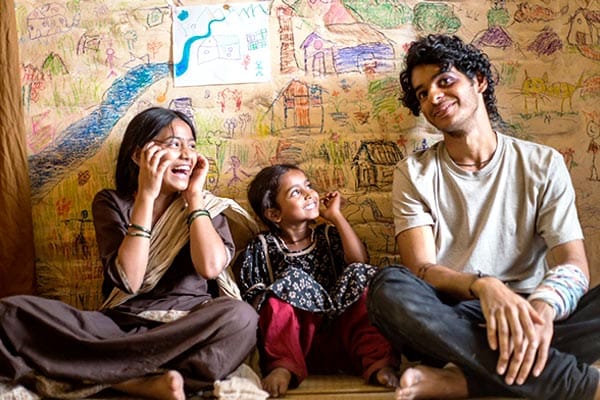 Thanks to Netflix, caught up with Beyond The Clouds which I had missed in the theatres. The film is nowhere near the best films of Majid Majidi, but it certainly has its moments and quite a few of them.

The biggest strength of the film of course is Ishaan Khattar, who makes such a wonderful self assured debut. I liked him a lot in Dhadak too, but he is just brilliant in this film – such a charmer, his eyes speak and conveys the complete arc of emotions. Contrastingly, Malavika Mohanan is the weakest link of the film and pulls down almost all the scenes she features in with her shrill performance. As a result one never gets invested in the brother sister story, which is unfortunately the center piece of the film.

Far more captivating is Ishaan’s and Malavika’s respective bonds with the kids that come to their lives, and all the three kids Dhwani Rajesh (Tanisha), Shivam Pujari (Chhotu) and Amruta Thakur (Asha) are excellent. But did they seriously name the girl from a poor rural background Tanisha? Shows the superficiality of understanding of the world Majidi is dealing with here. G V Sharada and Gautam Ghose were both pretty good in their almost silent roles, and I wanted to see more of Tannishtha Chatterjee.

Anil Mehta‘s wonderful close shot cinematography further accentuates the conflicts and turmoil of all the characters. Certain shots of Mumbai are vibrant and presents the city as a character. I thought the overuse of silhouettes got repetitive though, and is just one of the example on how overindulgent the screenplay was at several places. The storytelling also gets fairly cliched and predictable, and hence doesn’t speak to your soul as much like a well made film of this context and texture should. It still deserves to be watched for Ishaan and the kids – they create a world of beautifully charming moments.