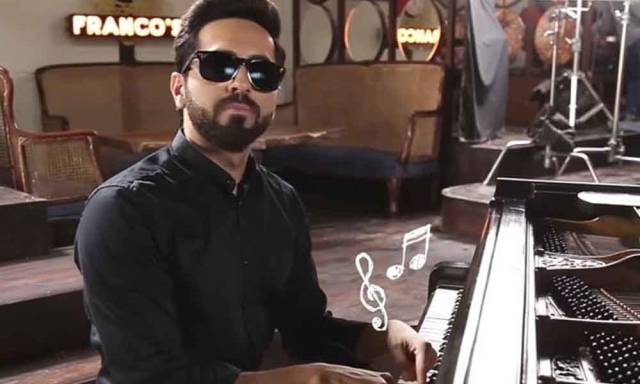 Years ago, John Lennon had left profound thoughts behind when he sang along “Living is easy with eyes closed”. With Andhadhun, Shriram Raghavan almost pushes us deep into the same metaphorical world with his rhetorical question and response – “What is life? It depends on the liver“.

In Raghavan’s world, opening statements like ‘the film is a work of fiction’ is far more meaningful than apparent disclaimers. It pushes you to the realm of magical realism where a story is being told from the vantage point of a blind piano player, where you look at and react to incidents as he reacts to them, and where the gap between what is seen and what is real is left to the interpretation of the blindfolded audience. Its the world of intricate lies, savage desires, despicable greed, and heinous crimes where everyone is hiding their dubious intentions behind charming smiles, dark shades, sleeping blinders, scary masks, noble professions, or opportunistic deceptions. The lines between what is real and what you are being fed are blurred here, so you can build your own world of who is speaking the truth and till what point, who believes whom and why, who is playing the sharper mind game, or who is using his or her vulnerability to play the victim card and to what benefits.

And all of this plays out when Andhadhun is not even a whodunit in real sense. The film answers all your initial inquisitiveness from the fascinating trailer within the initial act of settling down itself. But wait, the twists in the tale have just begun to unfold, and while you are trying to build a larger narrative in your head about where it all originated from and is eventually leading to, Raghavan and his terrific team of writers (Arijit Biswas, Pooja Ladha Surti, Yogesh Chandekar and Hemant Rao) keep throwing one curve ball after the other at you, captivating you with an edge of your seat thriller and generating humor through finely blended black comedy at the same time.

How else would one describe the brilliance of a satire in action, where a botched up crime scene is being washed out to the tunes of a terrific piano piece through the blinded perceptions of where you are seeing it from. The charade at play here creates the best cinematic moment of the year so far with a Chaplinesque finesse, and is possibly the first indication to the audience of the strength of sensory composure of the various parties involved in the game.

The set of scenes that precede and follow this sequence as the build up to the intermission point are all top class as well. Through the use of everyday props like a deadly conversation over a set of quirky His or Her mugs, an ever inquisitive kid and his tricks, a simple and helpful girl from the pub around the corner whose popcorn silently vanishes from her tub, dollops of nostalgia served through old hindi film songs and posters of a yesteryear star, companionship of a mysterious cat, the irresistible charm of a seductive diva, spilled over red wine camouflaging for blood, and some outstanding piano pieces; Raghavan flawlessly builds up one of the smoothest and yet most intriguing first halves of an Indian thriller ever. Kudos to cinematographer K U Mohanan and editor Pooja Ladha Surti, along with composer Amit Trivedi (yet again with another terrific score finely blending in with the narrative), all their notes are perfectly in tune with Raghavan and his vision, and together they serve us a sizzling symphony till the interval point.

The writing does a take a beating in the second half though, and some loose ends begin to show up (or was it designed to feel so?). A specific scam gets force fitted into the narrative, and although it does have a bearing on what follows, some of the sequences at a hospital or of a locked up hostage do feel a tad stretched out. Things happen a bit too conveniently to push the story forward, and you almost start feeling if there are way too many writing minds trying to pull the story in all directions. While all this is happening, your mind is still deconstructing what is the next move of the blind and the blindfolded, what is it that you can see but they can’t or vice versa, and what does Raghavan want us to believe from all that we are seeing or are being told. Hence, the terrific climactic twist still gets you although you always knew it was coming, and leaves you with multiple interpretations of what was real versus fabricated in the story and from what point. Who would have thought that your belief in a rabbit, its existence, or the witness of its presence would decide what you want to take back as the ultimate truth of this multi-layered drama.

But however you interpret it, you are bound to take back a lot of cinematic satisfaction, much of which is coming from the brilliant all round performances. In a case of near perfect casting, almost everyone leaves a solid mark. Radhika Apte is pleasing as the charming Sophie but honestly doesn’t have much to do as the most underwritten character of the film. I think she also looks way too intelligent to fit in believably to the naivety of Sophie. Anil Dhawan is perfectly cast as the faded star Pramod Sinha to add to the sheepish mood, old world nostalgia as well as to smartly use a few beautiful songs from his earlier films. Manav Vij is on point as the scheming inspector although even his part could have been better written for deeper character insights. Amongst the smaller roles, Raghavan’s favorite Ashwini Kalsekar shines the brightest as Vij’s wife and rules her scenes with a really spunky performance.

The film however ultimately belongs to an enigma called Tabu and the absolutely amazing Ayushmann Khurana. Tabu is fascinating in everything she does, and her Simi here is multiple shades darker than Macbeth’s Nimmi or Hamlet’s Ghazala. Tabu literally chews the character with her wild charisma, her composed persona, and her deadly fierceness – in short with all her Tabuism. Simi is served as the vintage wine at her intoxicating best by this powerhouse performer.

And in spite of this truth, if Andhadhun has one absolute show stealer after Shriram Raghavan, it is Ayushmann Khurana without any doubt! Just goes on to show the kind of flawless form Khurana is in and the magic he has done with Akash and his world of eccentricities. He is in total control of his craft with Akash, and the transformation of mannerisms and expressions he displays here to effectively build the realities of two contrasting worlds within the same scene is simply outstanding. He does it multiple times and does it right every single time. With Akash, Khurana has easily surpassed all his previous performances, and has possibly also outdone all other brilliant performances of leading men this year as well. Truly superlative stuff this!

Satyajit Ray was of the opinion that in order for suspense stories to retain their repeat watching pleasures, they need to camouflage themselves into thrillers rather than mysteries, and the focus has to shift to Why rather than Who and How. That is when you can unearth the layers based on your understanding of characters and their motivations with each viewing. Shriram Raghavan seems to have followed the Master’s advice to the tee with Andhadhun. There is so much more to this film than what simply meets the eye and you question every single Why. It almost gives you the option to believe what you see, can’t see or don’t want to see. It almost gives you the liberty to use your vulnerability to protect yourself, whether you are the hunter or the hunted. And it leaves you with the thought that your weakness also gives you your position of strength – of deeper focus and of broader perspective.

Ultimately then, it all depends on the liver! You believe what you see, or you see what you believe, and the rest of the world does that with you! How’s that for a masterpiece!