With Zero, director Aanand L Rai and writer Himanshu Sharma want to take the viewers on a flight of fantasy. Their intent might have been to tell a deeply sub-textual tale of love between two unlikely and challenged individuals who want to realize the depth of their cosmic size emotions rising above and beyond the worldly pettiness. Their intent might have been to create a world of magical realism through complete suspension of disbelief, and get the viewers mesmerized in a larger than life spectacle and king size feelings of their vertically challenged superstar. Unfortunately, their flight of fantasy crash lands in the hands of a completely random script, non-existent control and haywire execution even before it takes off properly!

I don’t know how else to describe this film other than associating a two word tag line to it – Kuchh Bhi! Picture this – A vertically challenged man starts off his journey by beating his father in a dream, easily gate crashes into an event of a world renowned space scientist and easily befriends her, recreates a cinematic set and a holi sequence in a five star hotel sprewning it with a blast of colors and artificial rain, gets her to fall for an uneducated himself just like that, gets randomly kissed on the road by a reigning cine superstar, casually walks in to the finale of a dance competition and wins it in spite of all oddness, becomes the close confidante of the superstar again without breaking any sweat, is suddenly the center-stage of a galaxy of stars with them cheering for him as if he is the superstar himself; and then seeks cosmic intervention, faces a gun shot, befriends a chimpanzee and moves to Mars in an attempt to woo back his lady!! How do you really summarize such a bizarre set of sequences, totally disjointed in logic or emotions or anything, other than well – Kuchh Bhi! Seriously, what was Himanshu Sharma thinking?

There is very little that makes sense in the film from start to end. Rai who has specialized the craft of creating the small town milieu in all his films launches his film in the comforts of the known territory of Meerut before skyrocketing it to the unfamiliar worlds of flashiness of a tinsel town or the scientific corridors of a space research center. But Rai and Sharma find themselves in sticky wicket even in their familiar territory. Way too much time is spent just to showboat the cockiness of Bauua Singh so that the superstar can use all his swagger and over the top mannerisms to at least satiate the expectations of his fans. He is also extremely ill mannered and offensively disgusting at times. Unfortunately, the lines and dialogues given to him are not even remotely funny and just remain cheesy. The screen-time given to establish the romance of Bauua with Aafia is unbearably long and moves at snail’s pace, and yet it completely falls flat because there is absolutely Zero chemistry between the two. You are not drawn into their world of incompleteness, pain and void for a minute, and hence when the rest of the story wants you to take the leap of faith and get engulfed in cosmic aura to match up their stars eternally, you only feel blanked out and lost in space and time. You have not bought into either of their emotions for the other, and hence never get involved in their heartbreak, frustration, anger or yearning at any point of time.

Relatively, the subplot of Bauua’s fanboy craze for Babita Kumari, their coming together at all odd junctures, and their fairy-tale companionship, though unreal, is the most engaging and watchable part of the film. There is a certain natural charm to the moments they spend together and you want to believe and stay in that shining world of stardom created around the blazing aura of Babita. You keep your built up frustration aside and ride along with Bauua and Babita and their fascinating story.  But as it always happens, the good things of the world don’t last for long and hence Rai brings an abrupt and silly end to this track as well, thereby bidding farewell to any leftover acceptability of the film. The least we speak about the third act of the film that follows, the better. By that time, the film has lost all coherence and you have lost all your patience as well!

Bizarre as it may sound, but in a film that stars Shahrukh Khan and Anushka Sharma, it is Katrina Kaif who is most watchable. It is easily one of her better performances in many years, and other than a couple of sequences she is pretty effective in her performance even outside of looking hot and dancing to a tailor-made song. In sharp contrast to her is Anushka Sharma who has possibly given the weakest performance of her career as Aafia. Her rendition of a person disabled with cerebral palsy is not just inconsistent and forced, but it almost becomes a mockery of the ailment. She is given the weirdest of characters arcs and the worst of lines to emote, and that does not help her either. And I was shocked how they showed her writing so fluently on the board or even firing a gun with her condition. Its a disaster! 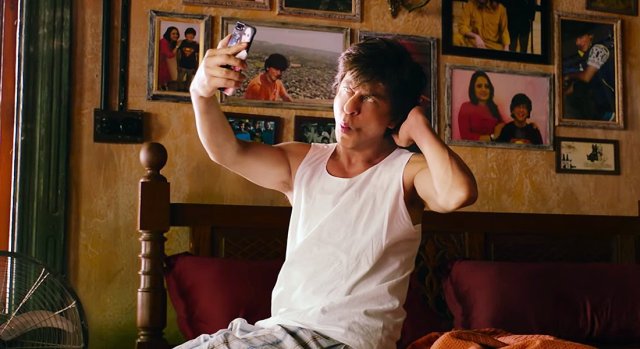 And then, there is Shahrukh Khan, his world of insecurities, and his desperate ghost direction to combat them! There isn’t really anything new or fancy in his performance other than the technical gimmick. We get the same old overload of mannerisms to establish a way too garrulous and cocky Bauua, with overdone silly jokes, hammered dialogues that no one would speak in real life, and rather irritable expressions trying to pass it off as emotions! The man is so insecure with the normal that he has to pull a joke on his own dimples a mammoth seven times (I counted!) to remind everyone of his charm, do a Salman Khan style dance number to please the single screen crowd, wander wildly on the streets of US in his undies for no rhyme or reason, imitate a La La Land sequence to fly with his lady to simulated fantasies, and make a huge mockery of the heroic survival efforts of the far more realistic and grinding space ventures by a certain Cuaron or Chazelle by taking a trip to Mars just like that! But none of these desperate attempts can hold back the shooting star from falling, and dissolve into Zero.

There isn’t much to take home technically as well. The VFX isn’t spectacular, the editing is almost non-existent, and the cinematography does not stand out in any way. Ajay-Atul cast their spell only in one song which also gets spoiled by its pain-on-your-eyes picturization. Aanand L Rai is much better controlling his films as a Producer, but as a Director he just gets overindulgent with his drama and loses the plot. He always has. His career as a director has had a downward trend with each of his films. With Zero, he might have hit the rock-bottom!

With Zero, he has also achieved another impossible feat. Jab Harry Met Sejal feels like an infinitely better film now. Imtiaz Ali is possibly the happiest man on Earth today!