The sorrow of these lines reverberates all along, as Bird of Dusk (Sandhyer Pakhi) flutters its wings over an exquisitely crafted and deeply poignant nostalgic cinematic world of Rituparno Ghosh. It was a pleasure watching the award winning documentary film on the late maverick filmmaker at Nandan last evening, a rich and delicate tribute of filmmaker Sangeeta Dutta for her dear friend and long time associate. It is an evocative piece of cinema very lovingly crafted by Dutta and her team that is a befitting ode to the Renaissance Man of Bengali cinema. The man, who not only captivated all hearts and minds through his brand of sensitive cinema, but also became the voice and identity of a generation by his unflinching stand on life’s most important choices.

In one of the moving segments of the film, Aparna Sen recalls how possibly Rituparno Ghosh wanted to look like her. We will not know that, but we know the identity Ghosh gradually carved out for himself, and in the process never minced his words to share some of his deepest feelings – being confident, vulnerable and apprehensive at the same time. It is such fascinating nuggets and pieces of memory like Sen’s that are finely stitched together and nostalgically played out during the entire film. We see incidents, perspectives and bits and pieces of Ghosh’s cinema recalled by a lot of his celebrated associates, ranging from filmmakers like Aparna Sen to Kaushik Ganguly, some of his favorite actors like Prosenjit Chatterjee, Konkona Sen Sharma or Nandita Das, some of the Mumbai star cast he leveraged like Arjun Rampal or Sharmila Tagore, or the terrific technical team that he worked with ranging from Arghyakamal Mitra, Aveek Mukhpadhyay to Debojyoti Mishra. All of them come together to recreate a moving portrait of Rituparno Ghosh – his cinematic brilliance, his impulsive idiosyncrasy, his deep thinking, as well as his adamant transformation.  I do wish that some other significant voices of his career like Jisshu Sengupta, Debasree Roy, Rituparna Sengupta, Amitabh Bacchan or Shefali Shah found their place in this feature as well. That would have made it more complete, just like his films.

And through all the interviews and chats, we go on a nostalgic trip down memory lane  – from Hirer Angti to Chitrangada, the journey with its interesting anecdotes recalled. Prosenjit Chatterjee (who always acknowledges how this one director has single-handedly made him the ‘actor’ of today), fondly remembers how the entire crew of Utsab worked for no remuneration just because all of them believed in the subject and wanted him to make the very special film, or how Chokher Bali took some time to take off since Ghosh was not in talking terms with Prosenjit at that time and was still not able to finalize on the lead. Similarly, there are quite a few honest disclosures along the way, ranging from Nandita Das on her disappointment about losing Binodini, to Sharmila Tagore openly recalling how she was unhappy with the controversy created with her and Rakhee, or to Kaushik Ganguly speaking in no unclear terms about what he attributes as the reason for Ghosh going away so soon.

The big surprise of the film also comes in form of Mir talking rather positively about a lot of memories with Ghosh and also anchoring a part of the remembrance ride, while their animosity over one of the chat shows lingered in public memory for a very long time. Such wholesome perspectives coming from varied & disparate quarters added a lot of credibility to Sangeeta Dutta’s film, rather than just making it another glorified eulogistic feature. Add to it the aesthetics with which it is all presented – the film almost flows down like a beautiful poem.

Using First Person (a brilliant compilation of Ghosh’s writings) as the anchor to narrate the entire film is a masterstroke by Dutta here, that adds a deep personal perspective to the film. Getting Soumitra Chatterjee to voice it over only makes it even better. Special shout-out for the segment on early years of Ghosh, revisiting his growing up years, his time with the advertisement agency that shaped him, a brilliant montage of some of the ads he created, as well as his recollection of the heartbreak with Hirer Angti. 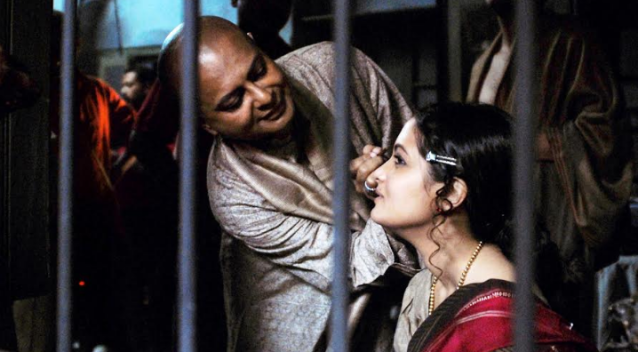 My gripe here is with using the young actor Ranjan Bose as a sort of impersonation of the filmmaker to walk us through the memory lanes of Ghosh’s world. Not the actor’s fault, but frankly it is the most jarring aspect of the film, does not integrate well with the script, and takes away some sheen from the aesthetic smoothness of the film.

I also wish that the film had ended as brilliantly as it started. Sangeeta Dutta starts the film so well with the scene from Arekti Premer Galpo beautifully setting up the context of Bird of Dusk, and follows it up with capturing the essence of Kolkata (some terrific camera work there) – the city, whose urban middle class culture formed the heart and soul of all of Ghosh’s stories. The accompanying music is also brilliant. Dutta had that opportunity in the end as well to finish it on a high. I personally thought that the film reached its crescendo with her using parts of Niladri Chatterjee‘s tribute post his death, a piece that poignantly captured the essence of Rituparno Ghosh or at least what he stood for. She could have left it at that and could have overlaid it with a running montage of the most heartwarming moments from his movies. That would have been the the best closing tribute to the man and his legacy, without dragging on any further.

The unparalleled emotional sensitivity and the complex relationships that Rituparno Ghosh so effortlessly portrayed in his films came from his immense understanding of the human psyche, and for a lifetime he expected the same sensitivity and empathy for himself too. Unfortunately he had to fly away to more peaceful abodes quickly when he didn’t get all of that. Bird of Dusk is an excellent overall attempt to reconstruct that free-sky understanding through the lens of warm empathy, profound love and a deep sense of loss. Thank you Sangeeta Dutta for such an emotionally rich experience, its a must watch – just like the cinema of Rituparno Ghosh!