In one of the stunning scenes in Nagarkirtan, the central protagonist Parimal, is struck in a gaze of a woman undressing comfortably in his physical presence, who is sharing her frustration on how she is taken for granted to do everything at home and also burdened with the expectation to be a child bearer irrespective of her say in it. The big call-out here is that Parimal is actually Puti (or Pari), who is a woman trapped in a man’s body, and desperately wants to acquire her physical female form.

Puti is in a melancholic awe of that aspirational physical form getting unraveled, because deep within she knows that she will never get there. It will remain Puti’s purpose of life though – this quest for imbibing her ‘wholesome’ identity, in spirit and in form, that will honor her with the agency to love, and to live, the way she was always intended to.

In another scene in a different set-up, we see Madhu, who believes that he is in love with Puti, getting very disturbed by seeing Parimal behind the facade of Puti, and explicitly making it clear that he would not want to look at her without the facade. Like Puti, and unlike her, Madhu has his personal struggle with himself to accept and acknowledge his preferential sexual divergence from the normal. In one moment, he is uncomfortable with his homosexuality and questions the possibility of love between two men, and in the very next moment he wants to normalize it by making himself understand that he is in love with Puti trapped inside Parimal. It is the quest of his ‘normal’ identity through Puti, he wants to recognize that within, he wants that recognition from the society, and hence he is ready to go to any extent to formalize that, very well aware of his sparse means to get there.

Kaushik Ganguly‘s passion project Nagarkirtan becomes a mouthpiece for all such marginalized and different individuals who want to fit in, who want to be accepted as they are, and who want to experience love and life like the rest of the society, that has no space to understand, appreciate or welcome them. Nagarkirtan wants to breathe free in a world where love transcends gender or class, and is celebrated in its purest form – like the blossoming romance of the eternal lovers Radha and Krishna, or like the devotional submission of Chaitanya Mahaprabhu, the widely acknowledged embodiment of both Sri Krishna and Sri Radha, thereby elevating it to the highest forms of spiritual piousness.

Ganguly, in his quest for attaining the most revered acknowledgement and identity of love, creates an immersive and compassionate world of two tentative individuals exploring their surreal relationship in the religious backdrops of Nabadwip or Krishnanagar, haunted by the cruelty of a stark, nauseating reality around them. Madhu (we see the inspiration from Krishna’s Madhusudan) hence plays nothing but flute in a troupe of kirtan singers; while Parimal wants to think of herself as Pari (the angel), who after being betrayed by fate in an earlier incident, runs away from home to become Puti (the small insignificant one, or a loser in a game of Ludo) in a shelter of transgenders. Puti is Radha trapped within Krishna – and the symbolism of her eventually imbibing blue (Sri Krishna’s skin tone across our scriptures) in search of her identity is a strikingly devastating reminder of who she is. And then comes the stunning last sequence of the film, where Madhu seeks a full circle of his life and of his identity. Through Madhu and Puti, the identities of Radha and Krishna become one and the same beyond a point, with the purity of their love attaining liberating spiritual highs, grounded to roots by a violently numbing pain – only Kaushik Ganguly could have aspired to attain such astounding depths of rich storytelling.

In an extremely well written screenplay, the entire journey of Madhu and Puti is traced across the dark alleys, dingy by-lanes, and the bare-bone dungeons of life, through a parallel non-linear narrative that traces their past and present side by side to converge at a point midway, and then again picking up another horrific chapter of Parimal’s past as a parallel narrative to further dive deep into the mental construct and horror that Puti lives with, that decides where she eventually goes. Ganguly has no intent to soften the impact of this harrowing journey, and yet it is the mastery of his craft that ensures that he delivers the most gut wrenching experience without compromising on any of the visual or emotional aesthetics to get there. It is a masterclass in unadulterated and uncompromising filmmaking that reaches its peak in the final act of the film, which is an excruciatingly commentary on how society at large is dead on conscience and empathy today, looking out for ‘entertainment’ in the most heart wrenching moments of life, and eventually pushing marginalized souls to find recluse in unimaginable burrows of sorrow.

A big shout out to Ganguly’s technical team that makes Nagarkirtan so resolute in its tone. Sirsha Ray‘s camera captures a treacherous portrait of the despicable life of the transgenders, as well as the aesthetics of the tender moments of togetherness between Madhu and Puti with equal aplomb. Subhajit Singha‘s brilliant editing ensures that there are no unwanted jerks as the narrative keeps hopping between the parallel tracks other than building up on the intentional chaos of the unfortunate lovers. Gobindo Mandal‘s costume design and Ram Rajak‘s make-up works like magic to transform Parimal into Puti, and their national awards could not be more deserving. And then there is the astounding musical score by Prabuddha Banerjee that is going to haunt you long after you have stepped out of the theaters – it almost becomes the anthem of simmering passion and the unspoken language of love between Madhu and Puti, in their fleeting glances of desires or in their compassionate love-making, not to miss the chuckle inducing tune of ‘Kuchh kuchh hota hain‘ on Madhu’s flute as his first expression of liking for Puti.

In the rich supporting ensemble, everyone is apt and well cast. The transgender community that Puti lives with wins your hearts in spite of all of them being completely untrained and facing camera for the first time. It is Ganguly’s way to recognize them and bring them into the mainstream, just what he did with casting real life minnow artists in Chhotoder Chhobi earlier (aptly self referenced in a couple of scenes here in a Kaushik Ganguly Cinematic Universe). And not surprisingly, the transgender artists make the horrors of their outcast life, or a sudden rendezvous with their hidden but sensitive core trapped within an aggressive wrapper far more believable and authentic. There is an attempt to honor Manabi Bandopadhyay who plays herself in the film as the first converted college principal of India. It is a well intended segway to share the story of her shocking journey and to communicate the reality that the physical transformation that Puti desperately seeks wouldn’t bring in a sudden nirvana – the homophobic discrimination will go on for a lifetime. My only gripe there is that it was stretched far longer than needed and gets somewhat culminated in a patronizing tone. I would have rather wanted to see more of Bidipta Chakraborty whose empathy, warmth and understanding reinforces our faith in basic human goodness that still exists in pockets. Bengali cinema needs to use her a lot more in such well written parts. 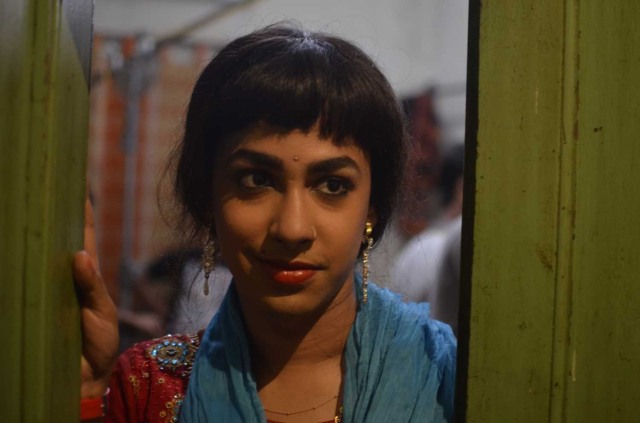 But beyond everything else, it is the brave and pitch-perfect performances of both the central leads in the film that makes Nagarkirtan such a stunningly unforgettable experience. Riddhi Sen as Parimal / Pari / Puti is beyond brilliant and completely dissolves in possibly the most complex character he will ever get to do. Kudos to Kaushik Ganguly’s vision to see where Riddhi could potentially take Puti to and then developing the character with such a fine blueprint to help Riddhi reach there. From the haunting breakdown of Parimal at his sister’s wedding to the effortless feminine gaze of Puti, to her most delicately shy and subtly seductive expressions of welcoming Madhu into a new world, Riddhi’s is a once in a lifetime performance and will be celebrated for years to come. If this performance didn’t get recognized with a national award, then what would?

In fact, my heart goes out to Ritwick Chakraborty who plays Madhu with equal finesse and depth as Riddhi if not more, and hence is equally deserving of the national recognition. Ritwick proves yet again that he is amongst the finest actors of the country today. Unlike Riddhi, his character didn’t have the additional help of a cross dressed physical transformation, and yet Ritwick’s was an outstanding portrayal of his own internal turbulence to accept his reality. And if his prowess across the entire film still did not do it for you, he simply leaves you stunned with his spellbinding performance in the final set of scenes – literal goosebumps there!

I wish the film had a better translated name in English, the current one totally dilutes the poetic brilliance of its Bengali name. A film that most respectfully starts with a dedication to Rituparno Ghosh, who lent his unflinching voice to the identity of the third gender (as he would call it), should have got some of these important aesthetics right. However, Rituparno Ghosh must be smiling and blessing Kaushik Ganguly from up there today. Ganguly made one of his finest films ever in Arekti Premer Galpo, boldly dealing with homosexuality way back in 2010 with Ghosh in the lead. Nagarkirtan now deservingly becomes one more spectacular addition to Ganguly’s rich filmography and would definitely rank amongst the A+ entries. Only time will determine the position it will settle down at based on how well it ages past the initial awe. For that, you have to grow over the spiritually cathartic and profoundly melancholic trance it has left you with for now.