Gulzar, in one of his reminiscences of Pancham, had once said..

In Churni Ganguly’s Tarikh, the three central characters Ani, Ira or Rudra could have easily said the same about life as it happens to them. The footprint that one creates during a lifetime on the minds and hearts of the near ones, or not so near ones, either in the real or virtual world’s timeline, becomes a permanent impression for life, even after people are long gone. The timeline hence gets frozen in eternity, and becomes a staggering documentation of what people stand for or cannot stand for in their lifetime – beliefs, fear, aspirations, insecurities, or passing emotions of joy, pain, envy, love, loss and everything in between.

For those who have watched both Nirbasito and especially Tarikh now, can gauge how sensitive a person is Churni Ganguly. It reflects deeply in the kind of real but intensely emotional characters she creates, and with such utmost care. She wants to tell stories of life, invariably ends up telling stories of loss, but even in that she firmly believes that the real story is about the people who are left behind dealing with the sudden going away of the loved one and struggling with their side of new found incompleteness. So much so, that the rest of the story becomes all about them making peace in their own ways, grabbing anything of the leftover memories in their minds, in inanimate objects, as a reflection in another person, or in the frozen social media footprint. Each of them become entities in their own right, and one is constantly exploring closures in them – of unanswered questions, of random assumptions, of unmet expectations, or of uncalled for distances.

In fact, explorations becomes a key theme in the film in many other ways as well. At one level, the film beautifully explores the fabric and the spirit of the two cities (and their people) it bases itself in through the impeccable frames. At another level, it explores intimately personal friendships in so many shapes and forms – between a married couple who can openly talk about the parallel relationships of the other, between two childhood friends who are as close as they are apart, between two soulmates in very special and inexplicable relationships, between a Rudy and a Ninni, between a grandparent and a grandchild, between a set of grieving parents and their strength to bear loss together, between a teacher and his students who can openly debate about everything, and in whom the teacher wants the flame of his ‘ineffective intellectualism’ to stay alive and turn into a game changer. And at yet another level, the film explores the macrocosm of one’s intellectual agency spread across a political identity, an immense love for art, literature and history, and a desire to seek justice for everything unfair and imperfect in this world. 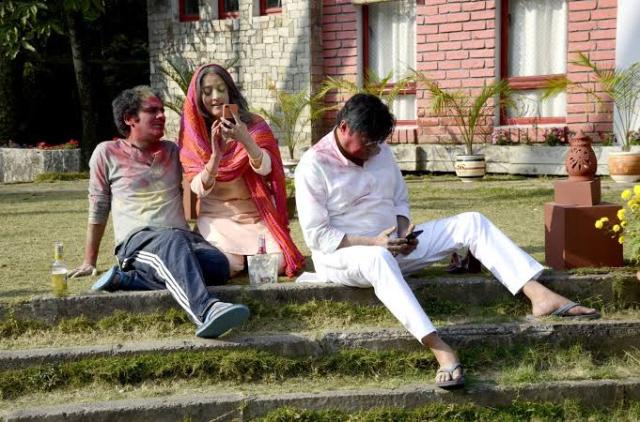 These are all extremely complex themes, but it is Ganguly’s craft that it fits in very well into a sharp but lucid screenplay, and creates a deep impact on the viewer. She stitches feelings, desires and moments across a timeline to create her narrative, and it is interesting to see how the reference point of those feelings suddenly changes from a celebratory date to a date of loss midway through the film. In fact, there are multiple things in the film that demands it to be very keenly observed and consumed. The film is certainly not for casual lightweight viewing, and needs our attention in every frame to join the dots together and realize the emotion behind the visual story.

And that is fair, because throughout the film we also appreciate how keen an observer Ganguly herself is about life. The detailing in her frames, and her shot compositions tell their own story. Only those who have observed children minutely in their homes can seamlessly blend in the constant nonsensical chatter with a kid as the unavoidable background sound in even the most serious discussions. Only those who have observed death up close would project the claustrophobia and chaos of a home immediately after the incident so accurately. From a distance it is about the frenzy of a crowd where everyone is trying to be a part of the tragedy in their own way (with the sense of hospitality of the middle class home still staying intact even in that moment of extreme sorrow). Look deeper inside, and the family is trying to bear with the loss in their own ways – in the poised strength of elders, in the innocence of a child unaware of what it all means, in the stoned shocked state of the spouse or in her eventual breaking down in her zone of comfort. 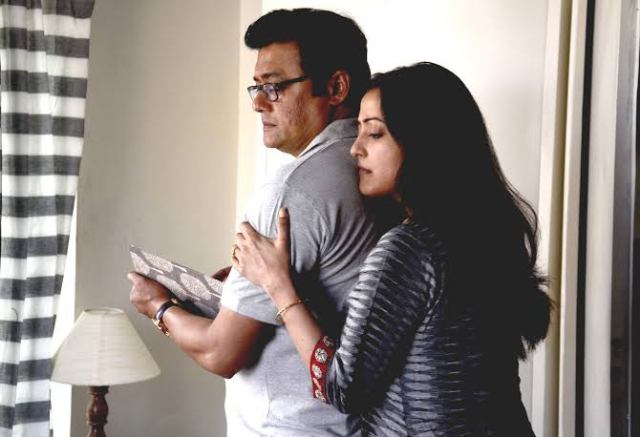 Only an immensely sensitive human being can sketch such passionate character arcs. It is fine if we don’t identify with all of them and some of them come in as repetitive, directionless and chaotic – like the track involving the students and their philosophies. May be it is just us who have left that timeline behind by decades and hence don’t understand the whims / motivations of that generation. But when Ganguly talks about a protagonist who despises patriarchy and takes pride in his ‘allowing’ his spouse to retain her maiden surname after marriage, but is deeply dissatisfied within about their intellectual incompatibility and just can’t let her be, we totally identify with his complexities. We completely get the intensity of a friend, his envy and his helplessness as he sees his soulmate go through all the pain, but does not think of influencing the situation to his advantage even when he can, even when he has the support of a mother by his side. And we totally relate to the behavioral pattern of another person who is desparately trying to search answers from the past, or wants to feel the presence of the person gone by in something as impersonal as a social media platform, something she only used very casually in the past to ‘watch puppy videos’, and something she logs out from when she is ready to look forward to new beginnings.

And it is a bunch of extremely nuanced performances that brings it all alive on screens. Churni Ganguly extracts a terrific performance even from the little child in the family and the range extends to the enacts of the elderly, from a very subtle Ardhendu Banerjee, to a very graceful Alokanonda Roy to the poignantly restrained Anushua Majumdar (so distinctly refreshing from her over the top performance from another popular film watched just a few days ago). Kaushik Ganguly remains smooth and effective even in a cameo. The Raima Sen that we meet in Tarikh was long lost. After a long time, we can feel the emotions behind her stoic persona, and she is particularly good in the sequences when she comes face to face with death up close. There isn’t much that Saswata Chattopadhyay can do wrong ever, and in Tarikh he portrays the most complex character of the mix with his natural ease. His performance is razor sharp as well as ‘comfortably numb’ as the moment demands, and you would feel all emotions for him from helplessness to anger. But the man who literally steals the show without doing much but just by being there and talking with his eyes is the exceptionally graceful Ritwick Chakraborty! What an year this is turning out to be for the man. He has now given back to back superlative performances with the Gangulys and possibly has another one coming up in a couple of weeks again. His silences speak, and how!

The silences also speak in every single frame composed and shot by Gopi Bhagat. His camera freezes and moves like a dream. The sequences of moving lights of cityscapes, the shadow impressions of places within enclosures, the closeup claustrophobic shots, all build up the narrative of events across the moving timeline as his director desires. This cinematography will remain a benchmark for long. Equally brilliant is the sharp and yet seamless edit by Subhajit Singha. The way he has stitched together distinct frames to create a synchronized mood reflects the depth of his craft, and he could achieve it even within the two minutes timeline of the trailer itself. He only extends it with a uniform smoothness in the two hour film. Anirban Sengupta‘s sound design is extremely rich and helps to amplify the observations of Ganguly throughout the film as already spoken about. The music arranged by Raja Narayan Deb has its own distinct footprint. Bandhu is a beautiful friendship anthem, nostalgia strikes back with the recreation of Eto chaoa niye kotha jaaye from Mohiner Ghoraguli days, and Sagarkuler naiyya beautifully completes the circle of pain that Ani references about boatmen and loss as often evidenced in literature. The production design by Gautam Basu is aesthetic to the intellectual taste of the film when needed and stark in white when depicting pain. Sabarni Das‘s costumes also beautifully highlight the character arcs of the protagonists from colorful to monochromes as they move along the timeline. And kudos to the captain of the ship Churni Ganguly again, as she ensures that her entire technical team finds their well deserved space in the film’s posters and other promotional material. A special shout-out to Opera Movies and Suparnokanti Karati to stand behind such a unique subject and believe in such a distinctly refreshing vision of Ganguly! May they continue to make such beautiful cinema in the coming times as well. 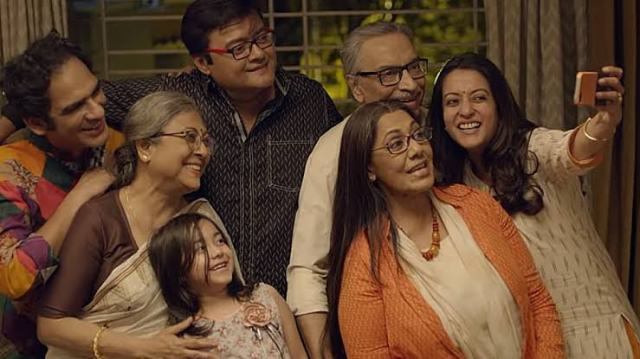 Tarikh is one of the most intelligent, sensitive, and thinking films of recent times. Its uniqueness needs to be celebrated with the same passion as each passing day of life, because the moments left behind are unconsciously documenting our own biographical footprint of life. Make effort to keep that footprint unique, relevant and memorable. Make effort to celebrate this film in its unique relevance. Make time for Tarikh, it should be your go to film to watch right now. And yes, this activity would be a relevant check-in on your Facebook timeline!