When a twenty five year old animation franchise feels as fresh, lovable and heart warming even in its fourth outing that is here after nine long years since the last Toy Story, you don’t get surprised at all. After all, it is a happy family of cute, vibrant, dynamic, helpful and extremely matured bunch of toys who only want to feel loved at all times, and want the same for the kid they belong to. Their’s is a magical world where they are far more humane than the humans around them, and thrive by the emotions of togetherness, loyalty, wanting to make the world a wonderful place for the kids, and themselves. They also live with the biggest fears of obsolensce – of not being loved any more, of becoming a rejected lost toy, or of their datedness making them less relevant and desirable with time as they get passed over to new kids or new toys come and join the universe. But even in these most trying times and a struggle for existentialism, they still stick on to their wholesome goodness, united and loyal, to make this world a better place – to infinity and beyond!

In Toy Story 4, a short flashback to a timeline nine years ago helps to set a quick context of the Toy Story universe, briefly talking about the young boy Andy and his sister Molly, and their world of toys that was always led and protected by Sheriff Woody, his friend and supertoy Buzz Lightyear, and other terrific toys including Rex, Slinky Dog, Potato Heads and the rest. The recap also reminds us of Bo Peep, Molly’s toy, for whom Woody always had a secret crush, and we are made to realize that he still misses her as she was passed on by Molly to another kid. Toy Story 3 had ended at the perfect place where Andy had handed over his lovable toys to the lovely but shy little kid Bonnie as he went to college, and it felt like a perfect closure for these warm hearts. Toy Story 4 picks up its story within a short time elapsed since that period when young Bonnie has just grown up enough to start her Kindergarden journey, and we meet her world of toys with some new additions, and an aging Woody (who was once the most favourite toy of Andy) finding himself relegated to the toy cupboard as she picks up her other playmates. While it does pain Woody, it does not take away his worries for Bonnie as she is apprehensive about her first day at school. And when she creates Forky, the cheap new craft project output who feels more trash than a toy, it comes upon Woody to induct him into the friendship zone of other toys, and elevate Forky from his non existent self-esteem level to a secured place of realization that he is now the most loved toy of Bonnie. What follows next is the new set of adventures when Bonnie and her family (including all toys) set out for a road trip to the carnival, and a new set of dangerous yet exciting adventures follow with all the toys focused on protecting Forky for Bonnie. That is what forms the heart of Toy Story 4. 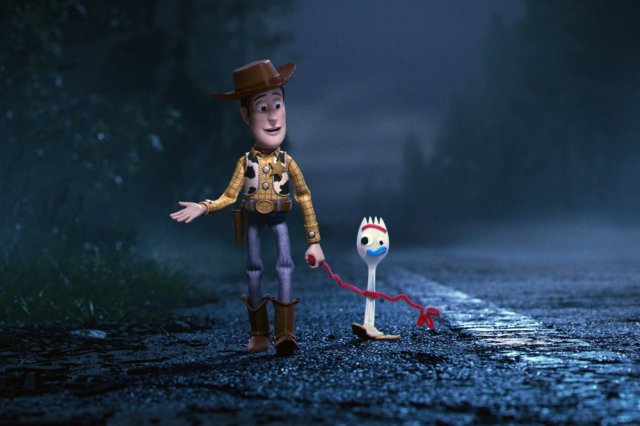 Toeing on the familiar lines of some toys getting separated from the others and the kid, the storyline enters darker zones of action in this film with more meta pop culture references, jibes on the current crumbling world of children, and life lessons applicable for kids and adults alike. So while Forky represents the theme of how happiness is often way more priceless than any materialistic price tag attached to it with Woody constantly by his side as the selfless and protective guardian angel, we are also reunited with Bo Peep, who is not ready to be forgotten as the lost toy and has learnt to survive in the harsh world building her own support system. And then there is a whole new world of representative toys – Gabby Gabby the doll who is literally fighting for her own voice to be heard in order to be loved and has crossed over to the darker side in desperation, the creepy Benson Puppets who mask their hideous intent posturing as well wishers, the daredevil Duke Caboom who finds himself as the victim of rampant hyper marketing, and the all so spunky but completely cynical plush toys Ducky & Bunny who are brilliantly planted to take a jibe on the most popular online game of these times with their ‘always on the go’ violent ideas to deal with the opponent and the smart chicken dinner references. Along with Forky, Ducky & Bunny are the most electrifying additions of Toy Story 4. They completely win your heart in every scene that they appear in, including their more than amazing end credit scenes that should not be missed at any cost.

Toy Story 4 beautifully spins off an amazing world of adventures involving all these toys as they impart the most relevant life lessons of compassion, loyalty, friendship and selflessness in most dangerous situations. With an amazingly talented cast of voice artists of course starting with Tom Hanks, to Tim Allen, Tony Hale, Keanu Reeves, Christina Hendricks, Annie Potts, Keegan-Michael Key, Jordan Peele and several others, the toy characters completely take you over with their charm. Add to it the super slick 3D animation with a vibrant carnival-like color pallette and the rest of well rounded technical excellence, Toy Story 4 becomes a rather happy and entertaining watch in spite of its heavily loaded subtext in a seemingly simplistic narrative.

At times though, the adventure and action feels a bit too crammed and busy, and just when the drama starts to feel a bit elongated and repetitive, the story self corrects itself, as if inspired by the selfless and uncorrupted focus of the toys to just spread happiness and nothing else. Also, one does feel a tad sad to see old favorites like Potato Heads, Sling Dog or Jessie having almost nothing to do here, and even Buzz Lightyear reduced to a secondary sidekick in all the action.

Basically in this terrific Toy Story universe, you want them all, all the time. It almost feels like that by getting us to miss some of these friends from the past, director Josh Cooley wants all the kids and their parents to love all their toys alike and not forget them. He wants to reach out to the kids to handle their toys with a lot of care, and play with them with all the warmth and affection as if they were fellow kids. Like always, it is an earnest call from the makers to go back to the basics of childhood in all its preserved innocence, away from the dark and disruptive influence of digital in a kid’s playful world.

Cooley also leaves us with the all important thought to self introspect – when is it the right time in your life to let go, and respond to your inner voice to rediscover your purpose. In these troubling times when we are all fighting existentialism in order to stay relevant and wanted, some times one just needs to re-calibrate life to reignite hidden aspirations and search newer avenues of happiness. And when a franchise in its fourth outing is able to leave you with such a powerful afterthought by completely choking you with emotions in a most heart tugging climax, it just wins its reaffirmation to be very very special!

Do not miss Toy Story 4 at any cost! It is all heart in its most charming ways. It is also the one wholesome entertainer for everyone alike, that silently shows the smartest subversive mirror to decaying world around it through Forky’s favourite catch phrase – I am trash!