The magic of Madan Mohan is beyond words. Possibly the best exponent of beautifully garnishing popular hindi film songs with influence of classical music and ghazals, it is appalling how underappreciated he has been in terms of recognition from mainstream hindi cinema. A treasure trove of brilliance, and yet there isn’t one single Filmfare award to his credit, the only established mainstream awards for the times he belonged to. He received a national award for Dastak (1970) but he deserved much much more.

The pathos that Madan Mohan brings to his compositions are unparallel, and though he has got unique gems with a range of wonderful singers from Mohammed Rafi to Bhupinder Singh, the name that has become inseparable from the magic of Madan Mohan is Lata Mangeshkar. Together they have created sheer magic in the world of soulful music. When you start listening to them, you do not stop for a long long time. 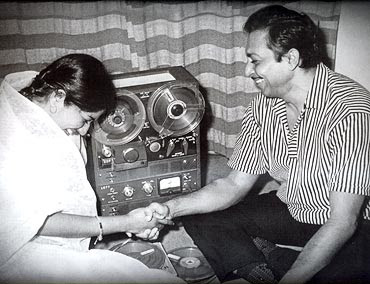 So as an ode to the Master, on his birth anniversary, we look at the 20 best songs of Madan Mohan and Lata Mangeshkar in no particular order – the immortal combo! Film music would have been devoid of so much beauty and pathos had these eternally soulful gems never got created!