Hotel Mumbai, the cinematic dramatization of the horrific 26/11 attacks in Mumbai eleven years ago, by the Australian filmmaker Anthony Maras brings back chilling memories of one of the worst terrorist attacks ever anywhere in the world. The inhuman episodes of terror went on for three longs days and ended up with loss of human life of the worst kind and harrowing experience of the lucky survivors that will haunt them forever . While Maras briefly touches upon the initiation of the attacks at the VT station (to stitch in the Ajmal Kasab story point) and Leopold Cafe; his primary focus is to recreate the incidents that happened at Mumbai’s iconic Taj Palace hotel before, during and after the incident. This was ofcourse the site where the terror prolonged for the maximum amount of time, resulting in very high casualties.

The film is a dramatization of all that horror (taking some definite cinematic liberties to recreate the events as they happened), but the film also wants to focus on the very courageous resilient fight back by the hotel staff, who lived the Taj mantra of Guest is God for the day and helped rescue many of the guests unharmed. The focus is primarily on two brave hearts – Arjun, one of the most low key waiters of the hotel (brilliantly portrayed by Dev Patel with restrained sensitivity and vulnerability) who is also constantly thinking about how he might never meet his loving family away; and Hemant Oberoi, the head chef of the property (a terrific Anupam Kher, who I thought deserved more screen time) who in a way drove this extremely difficult mission with a level headed precision and strong sense of duty. There are definitive story arcs around a few foreign guests and their varied reaction to the situation, and there is some screen time given to understand the brain washed motivation of the young terrorists amidst all the devastation they cause.

The recreation of the spine chilling terror works well in parts, especially the way the luxurious grandeur of the place and the people is well contrasted against the futility of materialistic opulence in the middle of a massacre. Some scenes work to create the impact especially because of the way they are composed and shot, or how cleverly the background music is used (or not). Some others work because of the heartfelt performances of Patel and Kher. Though a track with an infant baby in the chaos is somewhat manipulative to force drama, it works to evoke the intended emotions. The usage of real life footage to capture scenes on the street, some actual news reporting, and even a testimonial from Kasab is inserted well into the drama, to make it all feel lot more flesh and blood. The choice of the film’s end note of how the hotel bounced back to life with several guests attending its grand reopening event is predictable, but helps to leave behind the life affirming message of the indomitable spirit of Mumbai and its resilience. 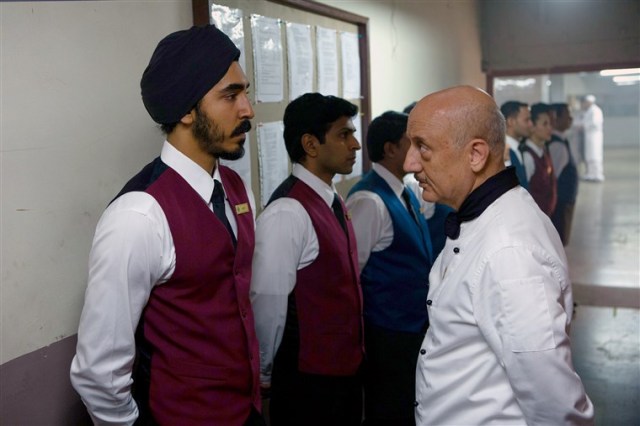 But there are lot of aspects of the film that could have been so much better. Here’s where I thought the film fell into its own trap, and didn’t leave the haunting impact that its subject very much should have:

1. The mandatory slum sequence of the Mumbai movie, so typical of the white filmmaker, was a major put off. It was no way necessary to force it in the film, and Dev Patel’s family connect and backstory could have been shown in so many other ways.

2. Other than Anupam Kher and Dev Patel who really pull through the entire film, we don’t really get a focus and insight into any other Indian hotel staff. The film focuses too much on multiple threads of some foreign guests, and other than a couple of scenes, they remain fairly ineffective. I believe the film should have delved deeper on a few more of the Indian staff and guests, and that would have enhanced the emotional quotient of the film. Even gentlemen from Mumbai police should have been better cast, and their involvement should have been better staged and performed.

3. The boys who played the terrorists were strictly one note, and even caricatures at some places. The mayhem they caused should not have come just from their bullets or curses, but also from their cold blooded body language and treacherous eyes. It was just not there.

4. It is also opportunistic on the part of the makers to release the film so late in India, months after its international release, just to time it with the week of 26/11 and try to encash those emotions.

The expanse of the terrible tragedy and the never-say-die human spirit to fight such agonizing adversity is a deeply affecting human story in itself that will move mountains. It doesn’t need any special dates, disaster movie tropes, outsider’s gaze or any such things to further gather any credit points. After all, the indomitable spirit of life is much bigger and far more precious than any of its larger than life cinematic adaptations.