In general, our movie watching experience is often driven by a few things especially when we talk about the slice of life genre – How likeable are the characters? Can I emotionally root for one of them? How attached are the characters to each other thereby evoking compassion or sympathy? Is it explicitly making me laugh, feel sad, get angry? Is it aligning with my preconceived notion of how I am supposed to feel for this film? Sometimes when we don’t have clear answers to most or any of these questions, there is a chance we will dismiss the film as uninteresting, bland or confusing. But Shoojit Sircar and Juhi Chaturverdi are not interested to find a happy path to these questions and create a feel good laugh out loud comedy to satisfy everyone. For the fourth time in a row, they present another deeply layered observational film packaged unconventionally yet again, this time as a dramedy, on the futility of attachments and running behind the eventually inconsequential things for a lifetime. Life is often about its nothingness and a goose chase to feed our desires, and the whole pointlessness of the entire journey and its disappointment is what one is left with in the end. Gulabo Sitabo shines because Shoojit Sircar and team intricately weave in this deep philosophy as the melancholic soul of the film, with an effortless ease into the everyday ordinariness of a seemingly brewing cacophonic premise.

The apparently quirky setup of a bickering tale between a landlord vs. tenant wrapped in comedy is just a garb here for a much deeper character study of human insecurities, greed, deceit and inherent pettiness. Technically one can’t even call it a landlord vs. tenant tale because the so-called landlord does not own the house and the so-called tenants almost pay nothing as rent. There is only one purpose of life for all occupants of Fatima Mahal – the mansion itself, and honestly none of them really have any affectionate love towards it. The dilapidated and crumbling mansion is the living testimony of the years of neglect and apathy of all its inmates, who come in varying shades of grey. None of them love the other. None of them want anything good for the other. All of them are living through their simmering voids and anxieties, and their lure for the mansion only enables them to prove a point, mainly to themselves. 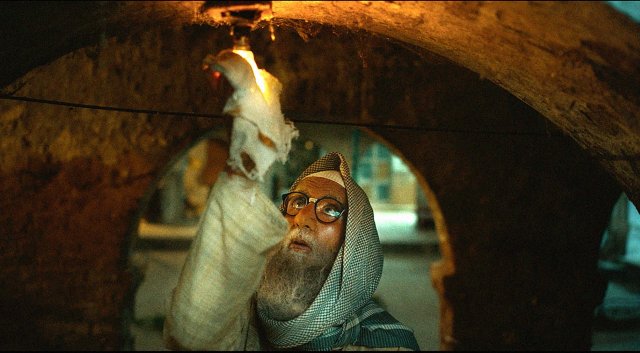 Mirza Chunnan Nawab (Amitabh Bachchan) has married a woman fifteen years elder to him just for her haveli, and never had children in the marriage to enjoy the mansion all by himself. He is waiting since a lifetime for his Begum to pass away so that he can officially inherit the same. In the meantime, he has no qualms about stealing trivial things from the same house and selling them for peanuts, while he continues to live on the alms that the begum provides. Honestly, the man doesn’t even understand what the potential worth of his elusive dream is, an annual rent of thirty thousand from the five tenants is mind boggling for him. Even though the grouchy old man would go to any extent in deceit, apathy and basic lack of courtesy to chase his greed; somewhere midway his haplessness starts to show up through his irritating façade, and one starts to feel sorry for him. It is not easy to evoke sympathy for such an unlikeable, cold hearted man. And it happens so easily because how brilliantly Mirza comes to life on screen. Amitabh Bachchan completely dissolves himself into this tricky character – his gait, his voice, his glance everything reflecting the fragility of the broken Mirza and nothing else. And thankfully unlike Piku, this time he achieves all of that without going overboard for a minute or trying too hard with any cranky mannerism. Mirza will go down as one of the career best performances of Mr. Bachchan as he reestablishes firmly why he is the boss of the business he is in for decades!

Fatto Begum (Farrukh Jaffer) sacrificed the love of her life and married Mirza so that she did not have to part with her haveli, but continues to live in her nostalgia of the past. At 95, she still applies henna to pep up her youthful soul. Her memory may have started to leave her company but deep inside she still remembers the thrill of her youthful adventures. Emotionally she reciprocates apathy towards her spouse as strongly as he does, and is still sharp enough to see through his intentions. In fact the husband does not have the agency to come and meet her just like that, the domestic help has more access to her than he has. The mansion is more of reminder to Fatto Begum about the hard choices she made, and her grief is reflected through how she has left the mansion to decay along with her soul. But like some lively corners of Fatima Manzil, Fatto Begum is still a bundle of spunk and fire, and Farrukh Jaffer is a hoot capturing the entire emotional arc of Begum intricately. Her cherishing chemistry with Bachchan on the screen also gifts us with some of the film’s most enjoyable moments.

Baanke Rastogi (Ayushmann Khurrana) was possibly born in the haveli (for they have been tenants for generations) and one could argue that the place is more of a home for him (and the other tenants) who have lived there since birth rather than Mirza who came in only through marriage. Life has been harsh to him – he couldn’t complete his formal education, his sisters are smarter than him, his girl friend makes him aware of his non existent finances all the time, and all of that hurts his patriarchal upbringing. Hence there seems to be an unsaid pressure on him to force himself as the leader of the tenant team and try to prove his worth. Retaining his stake on the haveli is more of a means to alleviate him from his existential crisis. He knows the budhau has an upper hand, and he wants to cover up his weakness in the garb of an irritating and forced arrogance, not really knowing how the world his waiting to trick him through and through. This was a complex character for Ayushmann Khurrana, who has typed himself by now playing the middle-class UP boy again and again, and this time around he didn’t even have the crutches of a social problem that he needed to solve. Thankfully Khurrana leaves behind all the average performances of his last three films, and rediscovers his refreshing charm here in an underwritten role, sometimes reminiscent of his lovely performance of Dum Lagaa Ke Haisha. And that is a good reference point to go back to. 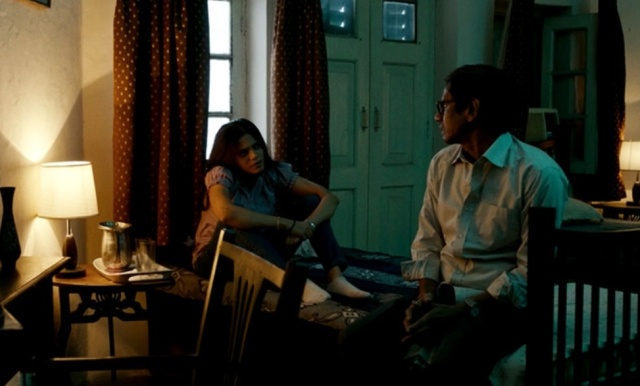 But there are outsiders behind the haveli too – archeologist Gyanesh Shukla (a breezy Vijay Raaz) representing the opportunistic Sarkaar who would always find ways to fool the common man, or the scheming lawyer Christopher Clark (a terrific Brijendra Kaala) fishing for the property for his capitalist client. They are both street smart vultures and want to game their transactions with Mirza, Baanke or his sassy sister Guddo (Srishti Srivastava stands out) with unabashed shrewdness, and none of it pricks their conscience. After all, they have mastered the art of playing with the emotions of the ordinary people by now. And like the haveli, Sheikhoo (an effective Nalneesh Neel) remains the silent spectator of this madaari ka tamasha going around.

Juhi Chaturvedi creates an eccentric but thoroughly lived in world with these unlikeable characters and loads them with such nuanced character traits that they all seem very familiar to us. Each of them has a selfish greedy layer wrapped in a layer of helplessness, further engulfed in a garb of quirk, thereby enriching the overall viewing experience as one tries to read through these characters and deconstruct them layer by layer. Just like the intriguing title of the film that quickly establishes the pointless bickering of puppets about things that are not in their control and who eventually get trapped in same empty box when the show is over, Shoojit Sircar injects the film with intense allegory and metaphors throughout for further introspection. The biggest one of course is the haveli itself that stands in for the lost glory, apathy, neglect and solitary decay of both Mirza and Begum. But there is more. Mirza has a fetish to sell off bulbs and chandeliers specifically in order to force others into darkness, the meek goats are like the tenants who add to the cacophony but can be easily deceived by the smarter animals around, the most private chambers of the house are brittle beyond repair to take any additional impact, the cartoon that plays on the television is Tom and Jerry, it is a green chair of greed that is passed down to the old man as inheritance. But my favorite one is the haunting image of Mirza walking away with a solitary balloon – a transient, artificially inflated piece of memorabilia is the only thing that he can eventually lay his hands on after a lifetime of tussle. It is a heartbreaking shot and pretty much summarizes the film in one frame. Superlative stuff!

The world that Shoojit and Juhi create is further amplified by some excellent technical contributions. The camera of Avik Mukhopadhyay possibly loves the haveli more than any other character of the film and captures its creaking agony in rich shades of blue and brown. The city of Lucknow and its old world charm is shot with equal affection. The aesthetics created by the brilliant cinematography together with the intricate production design by Mansi Dhruv Mehta creates a rustic lived in world. I craved to experience the magic unfold on a big screen. Shantanu Moitra comes up with yet another interesting album (with deep layered lyrics) that is refreshingly different from what we are served these days, and the background score especially is mesmerizing. It becomes the lifeline of the film. I wish the editing by Chandrashekhar Prajapati was tighter in places though. While the patient meditative gaze perfectly works for the first hour of the film, somewhere during the middle it tends to get repetitive and stretches at the brink of snapping. The film is around 20 minutes too long. Some scripting inconsistencies add to the dampening effect. The biggest sore point of the film though is a birthday party towards the end – it almost feels like reels from a different film forcibly inserted in a hurry, it is so out of place.

Thankfully, what follows immediately reverses that jarring impact and leaves behind an intense sense of melancholy and hopelessness. It is a fascinating last set of scenes that elevates back the film, and completes the full circle of what Gulabo Sitabo eventually wants us to reflect on – the pointlessness of bickering desires, the futility of attachment around things and the graceless existence to prove a point. None of it matters in the end. Life is so much more – and we need to have our own journeys to give in and figure it out!

PS: Gulabo Sitabo made its World Premiere directly on Amazon Prime Video on June 12th due to the ongoing global crisis, and can be watched from the comforts of your living room. Dive in to its eccentric charm!

Copyright ©2020 Jayashree Chakravarti. This article cannot be reproduced in its entirety without permission. A link to this URL can be used instead.