In Binisutoy : Without Strings, filmmaker Atanu Ghosh is interested in exploring these buried complexities of the lonely heart of two complicated individuals, and takes us on a journey along with them where we start identifying with their privileges, eccentricities, their crisis and their escape routes to win the tricky games of life.

END_OF_DOCUMENT_TOKEN_TO_BE_REPLACED

Meet Sujata. She is just another next door woman whose life has become stuck in a time capsule because of the ongoing pandemic. The lockdown has pretty much locked her existence down in an enclosed space she calls home, but one that subjects her to various levels of unbearable trauma because of her spouse who physically and mentally abuses her, cheats on her, and doesn’t bother to acknowledge her agency as an individual. Their relationship is purely transactional and Sujata is just there to render her services, right from the breakfast in the morning to routine sex in the night. All this isn’t new in her life though, but the pandemic has ensured that this torture now happens round the clock, twenty four by seven. There is a Sujata living in all our neighborhoods, and we get to see their linen drying up from our terrace everyday, just that we are not bothered to find out the dirty stories behind them.

END_OF_DOCUMENT_TOKEN_TO_BE_REPLACED

Abyakto (The Unsaid) leaves you in a trance of brilliance which is indeed difficult to capture in words. At all of 88 mins of runtime, debutant director Arjunn Dutta transports you into a world that is immersively poetic, heartbreakingly beautiful, intriguingly complex, and simmering with the melancholy of ‘nibiro bedona te puloko laage gaaye‘ in every frame.

END_OF_DOCUMENT_TOKEN_TO_BE_REPLACED

Through Robibaar, filmmaker Atanu Ghosh wants to take the audience on a journey of delayering love, heartbreak and deceit that are essential elements of the complex human mind. There are shades of black and white in everyone, everyone is struggling with boxed up memories and hasn’t really been able to go forward much with life where it really matters, and the frustration has led to a sense of opportunism in everyone.

END_OF_DOCUMENT_TOKEN_TO_BE_REPLACED

It takes some special kind of talent to make a boring film out of Satyajit Ray‘s most exciting character, and that too when he is making his on screen debut. Prof. Trilokeshwar Shanku has been a brilliant enigma for many of us since the very childhood, we have only been amazed by his brilliance and his very special inventions, even his pet cat Newton is a work of science (or art?)! His adventures have had repeated reading value and has left us wowed every single time. But then Sandip Ray has some special powers when he can convert such a thrilling central character and his dazzling universe to a film that goes as flat as possible. That is the world that Sandip Ray creates with Professor Shanku o El Dorado.

END_OF_DOCUMENT_TOKEN_TO_BE_REPLACED

Surjo Prithibir Chardike Ghore may not be a perfect film, but it deserves to be watched.

How far will one go in his or her passion to stand by their conviction and the sense of right or wrong? Why is the battle for ideals only reduced to opportunistic escapism for some, who only hold on to things per their whims and convenience? Why is there such lack of appreciation for genuine passion and the courage to be different, even if it may not align with the most prevalant or popular?

END_OF_DOCUMENT_TOKEN_TO_BE_REPLACED

Aparna Sen‘s contemporary take on the Tagore classic, that she has named Ghawre Baire Aaj is an unabashedly political film. So much so that I was almost wondering as I sat through the film, as to how difficult would have been the film’s certification process. So much so that much before Sen would have finally completed the film would she know that many would outright reject her film just because they don’t agree with the film’s politics. In a country that has never been this politically divided before, just that Ghawre Baire Aaj exists makes a strong enough statement. It takes a lot of courage to just be there. As a viewer, I just wished that the film was as flawless in its execution as clear it was on its intent, and didn’t compromise on the emotional quotient to meet its aggressive political ambition.

END_OF_DOCUMENT_TOKEN_TO_BE_REPLACED

Silence speaks a thousand words in Indraadip Dasgupta‘s deeply immersive and stunning debut directorial Kedara. Through the almost forgotten art of Ventriloquism, the film takes us on a journey in search of humanity, to go back and grow intimate with many things lost or forgotten, befriend our solitude, and reflect back upon the definitions of success and failure of a dejected existence. In these ultra fast and busy times, Kedara is the much needed thoughtful pause that celebrates the songs of silence, and relishes on living life king size in a unique personal universe that is otherwise laden with the burden of not-haves.

END_OF_DOCUMENT_TOKEN_TO_BE_REPLACED 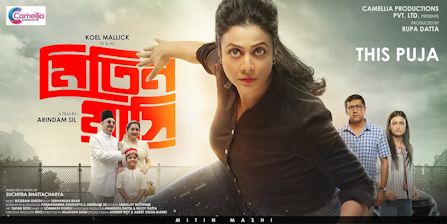 Arindam Sil knows the fascination of the cinema going Bengali with the thriller and mystery genre. He knows that even when he delivers rather mediocre to poor Byomkesh and Shabor films, they still sell like hot cake. So why not introduce another franchise of the ‘meye chhele turned mohila detective’ – he thought, add multiple bouts of self protective action sequences, dollops of preachy gyan to make Mitin the all out feminist crusader, and present her as the all powerful Dashabhuja during Pujo to ring merrily at the cash registers? After all, what else will the woke Bangali buy in to, more so because this may be the only clean entertainer available for full family community viewing during the festival! Chances are, his intuition will be proved right and the film will do brisk business, but Suchitra Bhattacharya‘s popular young adult series investigator Mitin Mashi demanded a much better film!

END_OF_DOCUMENT_TOKEN_TO_BE_REPLACED

It is often said that the most memorable cinematic experiences are often about how much we buy in and immerse ourselves into its make believe world. And when magical realism is the unifying driving theme of most films of the filmmaker in focus, you somewhat know that the make believe aspects of his latest film will be its key strength. You know that he will make the story breathe and will let you the space to interpret it in your own unique way without feeding it all in a platter.

It is also said that inspirations or adaptations can become more interesting, when the filmmaker infuses his own imagination and narration style to the source material, allowing for significant deviations to integrally sync up with the storytelling. Gulzar’s Ijaazat became such a classic because of the way he treated the original story idea of Jatugriha and brought in his own complexities. Quentin Tarantino is a master of altering the facts of history to create his own immersive cinematic world across films, be it The Inglourious Basterds or the very recent Once Upon a Time in Hollywood. The same can be said about national award winning filmmaker Pradipta Bhattacharya’s latest film Rajlokkhi o Srikanto, where he does take Sarat Chandra Chattopadhyay’s classic source material for the base, but takes the film to a completely different space because of the deviations he takes and the narration style he chooses. The only thing that he possibly demands is your flexibility and patience to stay with him while he lays the foundation, so that the wings of magical realism can be built for us to take off on a flight of an immersive surreal experience.